What will Vijay Mallya do after this humiliating defeat? He needed a coach like Tom Moody whose faith in Marsh and Pomersbach is vindicated.

Both these young cricketers were banned from Western Australian team due to their late night drinking habits. But they wonderfully bounced back in the domestic tournament (PURA Cup). Shaun Marsh was selected as “Western Australia cricketer of the year” and was selected for 2008 West Indies tour of Australia. 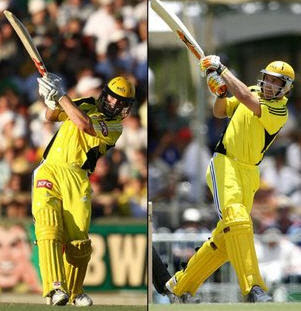 Defining moments:
1. Misbah out hit wicket when he was playing sensational shots.
2. Shaun Marsh and Pomersbach scored 21 runs in a Dale Steyn’s over.

1. Sreesanth once again bowled exceptionally well in the initial overs. Sreesanth performance improved after the “Slap gate” row.
2. Misbah-Ul-Haq batted superbly in his short stint at middle and he showed glimpses of his talents. Misbah’s association with bizarre outs is continuing.
3. Virat Kohli, Rahul Dravid and Mark Boucher played useful knocks but failed to score big knocks.
4. In my opinion, every team will have 6-7 Australians in their squad especially youngsters in IPL 2009. Their reserve players are playing better than our icons. Mohali is lucky to have 3 Australians (Shaun Marsh, James Hopes and Pomersbach) in the top order.

Verdict: Mohali is the most vibrant team in IPL. Young cricketers, beautiful franchisee owner and stunning displays from players – Do you want more? Punjab coach Tom Moody is doing wonderful job for Punjab. Australians are ruling Indian Premier League in all departments despite absence of main players.