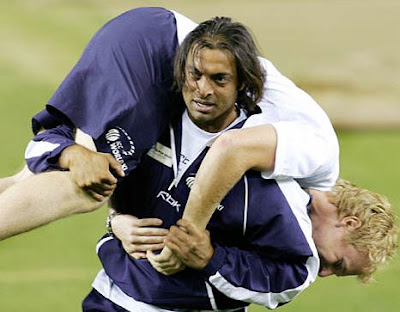 Shoaib Akhtar bowled out Rahul Dravid and Sachin Tendulkar in 1999 in an Asian Test championship match to silence Eden Gardens crowds. Now he took 4 Delhi top order wickets in just 3 overs to send them into raptures. Of those 4 wickets, Sehwag and Gambhir are tournament leading scorers. Shoaib Akhtar bowled this sensational spell in a match in which Pakistan bowlers Mohammad Asif and Umar Gul failed to find place in their teams. Cricket needs this man.

Toss: Sourav Ganguly won the toss and elected to bat first as expected on this shining pitch.

Man of the match: Shoaib Akhtar. It is very difficult to describe his performance in words. When he is on song, watching his bowling is a treat to watch. We want more.

1. Shoaib Akthar decimated Delhi. Do you know that this man played in this game without match practice for 2 months? He silenced critics like me who underestimated his influence. Thank you man.

Verdict: Despite this win, I am still worried about Kolkata. Except David Hussey, none of the batsman is scoring runs consistently. Body language of Virender Sehwag is not sending good signals. He seems to be taking things lightly. Mumbai Indians may beat both teams for semi-final berth.