Sensational century from Sanath Jayasuriya lifted Mumbai to 9 wicket victory over Chennai Superkings at Wankhede stadium in Mumbai. This is the best batting performance in Indian Premier League after superb knock from McCullum in the first IPL match.

Jayasuriya scored this unforgettable century in just 45 balls with 10 sixers and 7 fours. He scored 26 runs in Kupugdera’s over to end the match in just 14 overs. This is the absolute assault by Jayasuriya who has an average tournament by his standards. Dhoni failed to utilise properly his in-form bowler Balaji and paid heavy price. 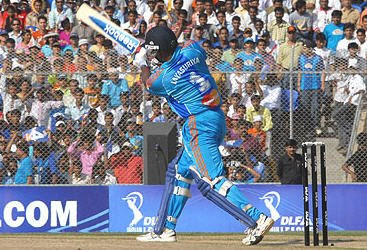 Brilliant partnership between Badrinath and Dhoni set a reasonable target of 157 for Mumbai Indians. Sachin Tendulkar looked uncomfortable despite one superb six. He was completely eclipsed by Sanath Jayasuriya who smashed even good length balls to out of the ground. Chennai lost four quick wickets but recovered admirably thank to 95-run partnership between Badrinath and Dhoni.

1. Mumbai won the match by 9 wickets with 37 balls to spare. Do you want more statistics? Mumbai sent strong signals to the opposition with this emphatic win.

3. Shaun Pollock gave just 9 runs in his 4 overs. What a contrasting statistic.

Verdict: As I said in my preview, Mumbai has ideal T20 lineup with good all-rounders like Punjab Kings Eleven and Rajasthan Royals. They are the strong contenders to win IPL 2008.